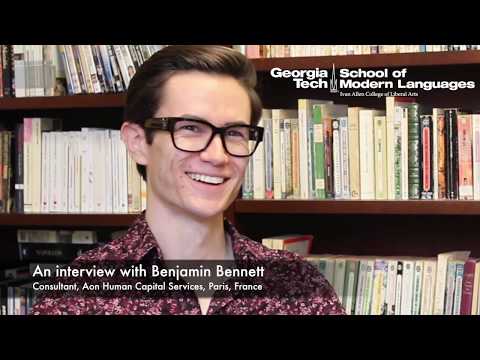 As Georgia Tech celebrates its graduating seniors and grad students, we were thrilled to sit down with alum Benjamin Bennett to learn about how learning French at Georgia Tech transformed Benjamin's career. Benjamin D. Bennett graduated from Georgia Tech in May 2012 with a B.S. in International Affairs and Modern Languages, with a concentration in French. He was awarded a Distinguished Alumni Award in 2016.

Today, Ben works in the Paris branch of Aon, an American risk management firm, where he focuses on human capital solutions.

“What that means is that I work with organizations based in France around their challenges with managing their people.” This could be anything from labor practices, to organizational structure, to Ben’s favorite, “looking at employee satisfaction and engagement.”

While he was a student, Benjamin received two President’s Undergraduate Research Awards (PURA) grants and was awarded the International Affairs and Modern Languages Senior of the Year. He participated in the French LBAT (Language for Business and Technology summer study abroad) and took a number of courses that prepared him to work in a French-speaking environment. He went on to get a Master’s in International Public Management at Sciences Po in Paris, one of France’s top programs in political science.

Returning to Tech for a visit before jetting back to Paris, Ben sat down with Stephanie Boulard, Associate Professor of French, and Sarah Schmitt, a current French student who conducted the interview in English and French.

“My time at Tech was fundamental in giving me the cultural keys to understand French culture,” Ben told us. For example, Ben explained, “understanding the history behind the labor unions’ relationship to French companies” means that you “know what will resonate with the people in front of you” and create better solutions that will actually work.

Through taking French at Georgia Tech, he learned about the history, politics, and cultural factors that shape the French-speaking world, prepared him to thrive in what he does today: helping companies support their employees in America, France, and worldwide.

“It’s so fundamentally important to know the language and understand the cultural context,” Ben said.

Benjamin Bennett is a wonderful example of the kind of global and high-impact career that is possible when you become an expert in language, culture, and communication. We are so proud of you, Ben! Congratulations on achieving a truly global career!

This interview is part of a series on the role of the humanities and language study in 21st century careers, "What is a Global Career?" It was produced by Dr. Amanda Weiss and Dr. Jenny Strakovsky.

The 21st Century Career Design Studio is part of the M.S. in Global Media and Cultures. For more information, visit: https://gmc.iac.gatech.edu